We are happy to announce GeoServer 2.19-RC release candidate is available for testing. Downloads are available (zip and war) along with docs and extensions.

This is a GeoServer release candidate made in conjunction with GeoTools 25-RC and GeoWebCache 1.19-RC.

This is an exciting release and a lot of great new functionality has been added. We would like to ask for your assistance testing the following:

In this release, MapML has graduated from community module to extension status. Map Markup Language (MapML) is a proposed extension to HTML, for maps. The objective of the project is to standardize accessible, performant Web maps with native support from Web browsers (maps in HTML). The GeoServer MapML extension will closely track the MapML specification as it evolves. Find out more at https://maps4html.org/, and if you like our goals, join the community group!

The MapML extension works with GeoServer layers and layer groups, and uses WMS, WMTS and WFS facilities built into GeoServer to provide simple map previews layers. The layer previews can be “dragged” from one browser tab onto another map preview to visualize a mashup of the layers of layer groups using the built in MapML viewer. 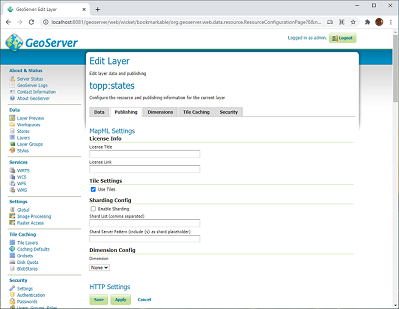 Editing a layer’s MapML properties in the Layers panel 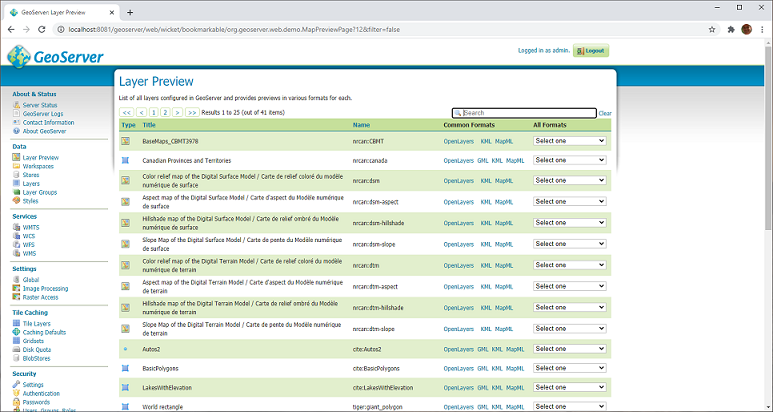 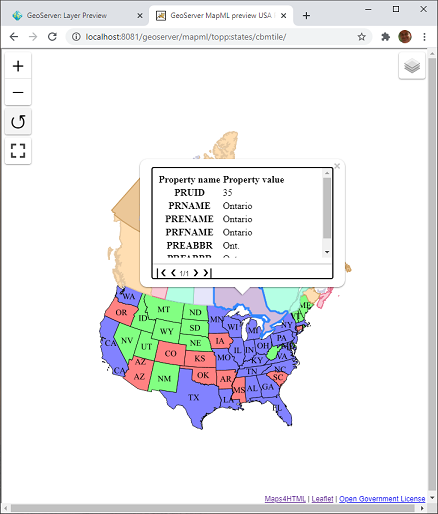 Mash up MapML previews by drag and drop

The Maps for HTML community would like to thank Andrea Aime, Jody Garnett and the GeoServer PSC for their support and help in getting this extension published.

The WPS JDBC extension allows to share the status of asynchronous WPS requests across a GeoServer cluster. The status of all requests, past and ongoing, can be stored in a database, for later reference.

The WPS download plugin provides support for the download of large amounts of data, allowing use of asynchronous requests, where using WFS, WCS or WMS for the same task would lead to HTTP timeouts. Also, download limits can be configured to avoid excessively large requests: size in MB, number of features, number of animation frames.

In particular, the following processes are available:

GeoNode uses the module to allow download of datasets, eventually clipped and filtered to the current view. The asynchronous download allows to download large datasets, and retrieve them later, once ready. 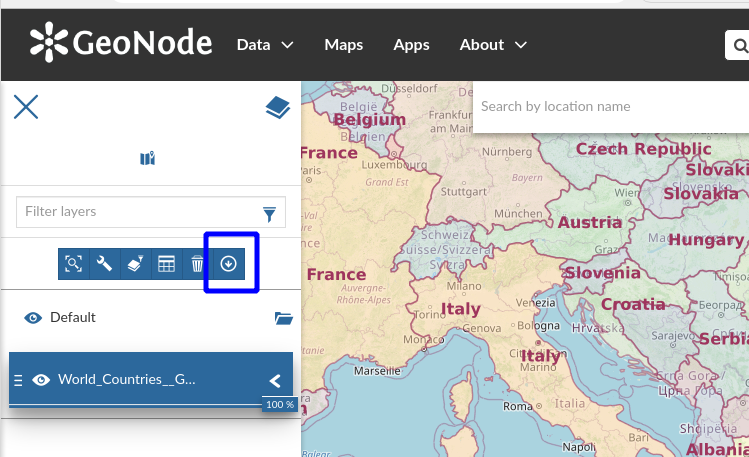 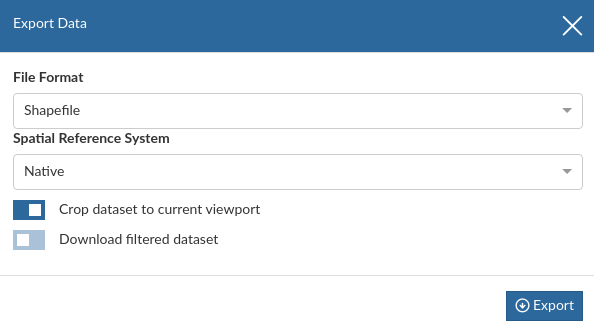 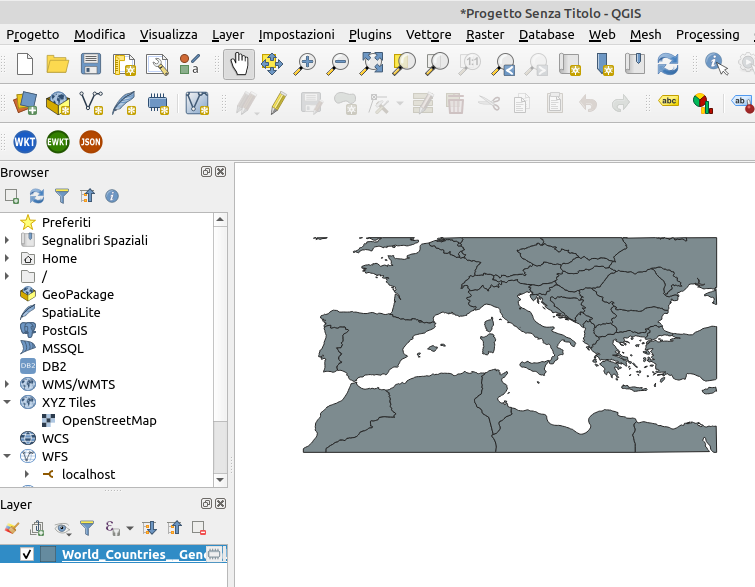 Thanks to Alessio, Andrea, Daniele, from GeoSolutions, for developing the extension, and GeoNode/MapStore for testing it in various production environments.

The WMTS multi-dimensional extension is an extension to the WMTS protocol developed during OGC Testbed 12. The extension allows to explore the dimensions attached to a dataset, providing ways to explore them, finding relationships between them.

Here are a couple of real world examples of this functionality:

The parameter extractor module is used to inject vendor parameters in all links that a standard OGC client uses, by either reflecting them into the Capabilities documents backlinks, or hiding them in an extra component in the URLs paths.

This can be used, for example, to provide a desktop client, such as QGIS, a different view of a given layer based on viewparams, cql_filter or env parameters, even if the client would not be able to use the parameters natively. Each combination of parameters receives a different starting GetCapabilities request.

For clients ignoring query parameters or even ignoring backlinks, the parameters can be added as a path component instead, and then expanded in a larger templated value: 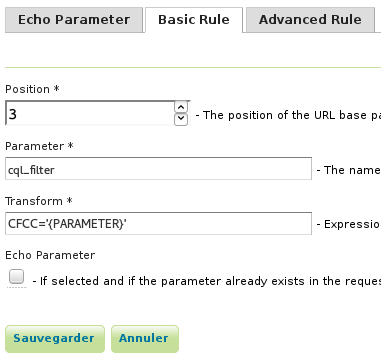 With the above setup, a URL ending with H11:

Thanks to Nuno Oliveira (GeoSolutions) for developing this module.

The GeoWebCache S3 blobstore allows to store GeoWebCache tiles in a S3 bucket. It has been also tested with a few other S3 compatible blob storage mechanisms, such as Minio.

This plugin is particularly useful when deploying GeoServer on AWS, but also when setting up a shared tile storage in Kubernetes. 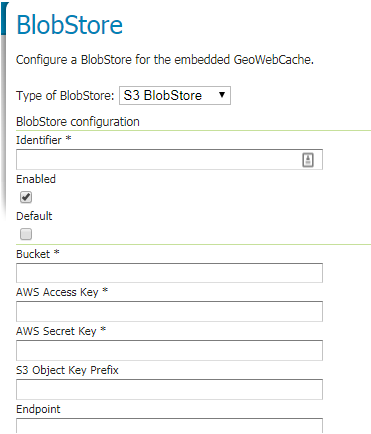 Setting up the S3 tile storage

The ArcSDE Extension has been retired.

In this case we found that the extension is no longer actively used, and lacked sufficient feedback and resources for continued development. The last tested ArcSDE 10.2.2 version is no longer available, making the required jars required for installation unavailable.

The Script community module has been retired.

The module provided scripting abilities for GeoServer, allowing to add WPS processes and small REST services in scripting languages, and storing them in the data directory.

Unfortunately the module fell un-maintained and would no longer build nor work.

GeoServer continues to be build with the latest open source technologies:

We do not get a chance to talk about the code-base that makes up GeoServer often, but recent changes and improvements deserve some praise. The GeoServer team has really embraced automating code checks, starting with simply formatting the code in a consistent fashion, to more advanced techniques checking for common mistakes.

Although all these changes sound small in isolation, the fact that they are performed on the entire codebase, and checked each time a pull-request is proposed, really provides confidence in the technology we publish.

Thanks to Andrea for this valuable work.

There are several other new features and improvements, including: